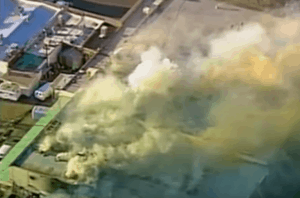 On March 14, 2001, Phoenix Firefighter and Paramedic Bret Tarver died in the line of duty after his self-contained breathing apparatus ran out of air inside a burning supermarket. He was 40 years old and an 8-year veteran of the force.

Tarver was one of the first crewmembers to arrive at the scene. The 5-alarm blaze eventually involved 120 firefighters, more than a third of the average number of personnel on duty in Phoenix on any given day.

Tarver was 75 feet inside of the structure when he became disoriented and incapacitated. Several of his colleagues tried to rescue him, including his partner who also ran out of air. They were unable to pull him to safety. It was the first firefighter fatality on the fireground for the Phoenix Fire Department in more than 20 years. Three other firefighters were injured, but survived.

Tarver’s death led to a realization that the department lacked an offensive firefighting plan for commercial buildings, and needed specialized plans, equipment, and training to address fires in non-residential structures.

Over the next year the department reviewed its standard operating procedures and fireground operational activities at the strategic, tactical and task levels in an effort to prevent such a tragic event from ever happening again.

Then-Fire Chief Alan Brunacini, Assistant Chief Bob Khan (who later became fire chief) and IAFF Local 493 President Billy Shields asked the Deployment Committee to determine exactly what happened during this fire and identify how the department could improve firefighter safety in non-residential, complex structures. Representatives of the National Institute of Occupational Safety and Health (NIOSH), the Arizona Occupational Safety and Health Agency (OSHA) and the National Fire Protection Association (NFPA) assisted them in their investigation.

After researching and ultimately recommending a number of safety and training improvements, Assistant Chief Khan became an advocate for what was then a new concept in air management, a building-installed air standpipe system called a firefighter air replenishment system (FARS) that allows firefighters to refill their air bottles at designated fill stations within a structure. At the time, the city had approximately 185 buildings that stood 6 floors or higher and many more slated for construction. The logistics of delivering air within those structures presented clear challenges that the Phoenix Fire Department believed could be best addressed with FARS.

Spurred by Assistant Chief Khan’s advocacy, the Phoenix Fire Department researched and thoroughly vetted FARS technology. As part of their due diligence, and before recommending a code change to their city council, the department wanted to test the system in their live burn tower, located in their main training center. By testing a live system in a staged emergency, they could ascertain if the system truly lived up to its anticipated value and if the system would perform under live burn conditions. They also hoped to get valuable feedback on use of the system from their trainees.

They approached the country’s leading provider of FARS, Rescue Air Systems of San Carlos, CA, for help. In a public-private partnership, RescueAir donated a system to the Phoenix Fire Department’s live burn tower, where it was tested and performed beautifully.

In April of 2004, a joint venture between the Phoenix Fire Department, RescueAir and the Arizona Public Service Company put the state’s first FARS system into APS’ new 20-story headquarters building. APS is Arizona’s largest and longest-serving electricity utility, serving more than 1.1 million customers in 11 of the state’s 15 counties. The system was unveiled in April of 2004 to much press attention.

“This system gives life to the firefighters above ground without them having to carry every breath of air with them up to the highest floors of a building,” Assistant Phoenix Fire Chief Bob Khan told the Arizona Republic during a FARS press demonstration.

According to the Arizona Republic, APS wanted to be the first in the Phoenix metro area with FARS in its building. Patrick Gilmore, the company’s senior facilities real estate manager, told the newspaper that while APS leases its space at the Arizona Center, they occupy virtually the entire building and wanted to keep their employees safe.

“It’s our people,” Gilmore said. “We’ve always been a good corporate citizen. My father was a firefighter, so I was an easy mark (when the project was suggested).”

Later in 2004, the Phoenix Fire Department went forward with a recommendation to add FARS to the city’s building code. The city council immediately adopted it, making Phoenix one of the first cities in the country with a FARS code for new high-rise construction. Shortly thereafter, a number of cities in Maricopa County adopted similar requirements, including Glendale, Mesa, Chandler and Tempe.

Khan told the Arizona Republic that Phoenix officials eventually would like to see FARS in big-box construction as well as in high-rises. In big-box buildings, such as sprawling grocery stores, manufacturing facilities and medical centers, the system is configured horizontally instead of vertically, as it is in high-rises like the APS building.

At the unveiling of the system at the APS building, Khan remembered Tarver and the tragedy that served as the catalyst to bring a FARS code to Phoenix. “A system like that could have saved his life,” Khan told the Arizona Republic. “If there’s a firefighter struggling to get out of a stairwell and he’s without air, it could save his life.”

In 2013, after a rigorous 2-year vetting process, FARS was added to the 2015 ICC International Fire Code under Appendix L, creating a standardized code for FARS that can be adopted by individual AHJs.

There are now more than 50 buildings in the Phoenix metropolitan area equipped with FARS.